The R language and its packages and repositories

This course assumes a good working knowledge of the R language. The Rstudio environment is recommended. If you are jumping directly to 5x, skipping 1x-4x, and want to work through a tutorial before proceeding, Try R is very comprehensive.

Bioconductor is based on R. Three key reasons for this are:

In summary, R’s ease-of-use and central role in statistics and “data science” make it a natural choice for a tool-set for use by biologists and statisticians confronting genome-scale experimental data. Since the Bioconductor project’s inception in 2001, it has kept pace with growing volumes and complexity of data emerging in genome-scale biology.

We say that Homo.sapiens is an instance of the OrganismDb class. Every instance of this class will respond meaningfully to the methods listed above. Each method is implemented as an R function. What the function does depends upon the class of its arguments. Of special note at this juncture are the methods genes, exons, transcripts which will yield information about fundamental components of genomes.
These methods will succeed for human and for other model organisms such as Mus musculus, S. cerevisiae, C. elegans, and others for which the Bioconductor project and its contributors have defined OrganismDb representations.

This section can be skipped on a first reading.

We can perform object-oriented functional programming with R by writing R code. A basic approach is to create “scripts” that define all the steps underlying processes of data import and analysis. When scripts are written in such a way that they only define functions and data structures, it becomes possible to package them for convenient distribution to other users confronting similar data management and data analysis problems.

The R software packaging protocol specifies how source code in R and other languages can be organized together with metadata and documentation to foster convenient testing and redistribution. For example, an early version of the package defining this document had the folder layout given below:

The packaging protocol document “Writing R Extensions” provides full details. The R command R CMD build [foldername] will operate on the contents of a package folder to create an archive that can be added to an R installation using R CMD INSTALL [archivename]. The R studio system performs these tasks with GUI elements.

Modularity and formal interdependence of packages

The packaging protocol helps us to isolate software that performs a limited set of operations, and to identify the version of a program collection that is inherently changing over time. There is no objective way to determine whether a set of operations is the right size for packaging. Some very useful packages carry out only a small number of tasks, while others have very broad scope. What is important is that the package concept permits modularization of software. This is important in two dimensions: scope and time. Modularization of scope is important to allow parallel independent development of software tools that address distinct problems. Modularization in time is important to allow identification of versions of software whose behavior is stable.

The figure below is a snapshot of the build report for the development branch of Bioconductor.

The six-column subtable in the upper half of the display includes a column “Installed pkgs”, with entry 1857 for the linux platform. This number varies between platforms and is generally increasing over time for the devel branch.

In this course we will review the objects and functions that you can use to perform these and related tasks in your own research.

Basic premise and overview of 5x

You know to manipulate and analyze data using R, and you understand a considerable amount about statistical modeling. The Bioconductor project demonstrates that R is an effective vehicle for performing many – but not all – tasks that arise in genome-scale computational biology.

This module, 525.5x, breaks into four main pieces, with one week devoted to each of

Subsections of this chapter will sketch the concepts to be covered, along with some illustrative computations.

The videos in “What we measure and why” provide schematic illustrations of the basic biological processes that can now be studied computationally. We noted that recipes for all the proteins that are fundamental to life processes of an organism are coded in the organism’s genomic DNA. Studies of differences between organisms, and certain changes within organisms (for example, development of tumors), often rely on computations involving genomic DNA sequence.

Bioconductor provides tools for working directly with genomic DNA sequence for many organisms.
One basic approach uses computations on a “reference sequence”, another focuses on differences between the genomic sequence of a given individual, and the reference.

It is very easy to use Bioconductor to work with the reference sequence for Homo sapiens. Here we’ll have a look at chromosome 17.

A standard representation for individual departures from reference sequence is Variant Call Format. The VariantAnnotation package includes an example. We have two high-level representations of some DNA variants – a summary of the VCF content in the example, and the genomic addresses of the sequence variants themselves.

We’ll conclude this brief discussion of motivation and technique with a look at measurements on gene expression in the model organism Sacchomyces cerevisiae, baker’s yeast. A highly influential experiment undertook to use genome-wide measurement of mRNA abundance over a series of time points in the reproductive cycle. Again we use an R package to manage the data, and we use a special Bioconductor-defined data structure to provide access to information about the experiment and the results.

After a bit of massaging, a topic on which you will become expert in the next few weeks, we can visualize the time course of a cell-cycle regulated gene. 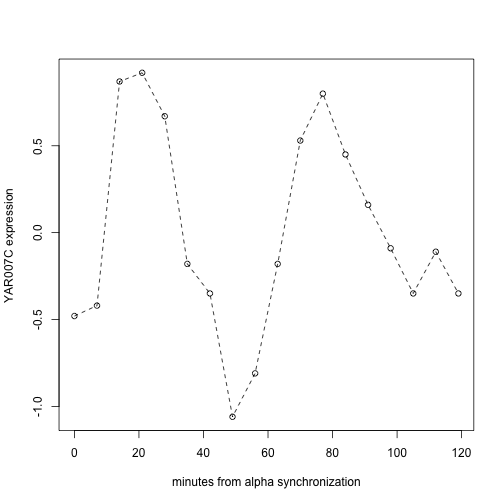 You’re about to engage with a few high-level lectures on genome structures and molecular biological techniques for measuring them. As you encounter these concepts, keep in mind what sorts of computations you consider relevant to understanding the structures and processes being studied. Find the tools to perform these computations in Bioconductor, and become expert in their use. And if you don’t find them, let us know, and perhaps we can point them out, or, if they don’t exist, build them together.