In the following sections we will cover inference in the context of genomics experiments. We apply some of the concepts we have covered in previous sections including t-tests, multiple comparisons and standard deviation estimates from hierarchical models. Here we introduce a concept that is particularly important in the analysis of genomics data: the distinction between biological and technical variability.

It is important not to confuse biological and technical variability when performing statistical inference as the interpretation is quite difference. For example, when analyzing data from technical replicates the population is just the one sample from which these come from as opposed to more general population such as healthy humans or control mice. Here we explore this concept with a experiment that was designed to include both technical and biological replicates.

The dataset we will study includes data from gene expression arrays. In this experiment, RNA was extract from 12 randomly selected mice from two strain. All 24 samples were hybridized to micro arrays but we also formed pools, including two pools from with the RNA from all twelve mice from each of the two strains. Other pools were also created, as we will see below, but we will ignore these here.

We will need the following library which you need to install if you have not done so already:

We can see the experimental design using the pData function. Each row represents a sample and the column are the mice. A 1 in cell indicates that RNA from mouse was included in sample . The strain can be identified from the row names (not a recommended approach)

Below we use create an image to illustrate which mice were included in which samples: 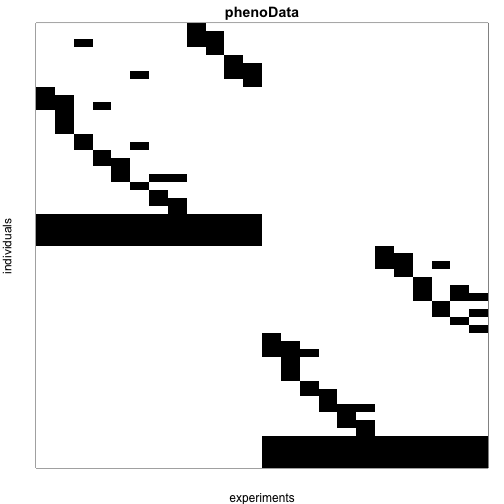 Note that ultimately we are interested in detecting genes that are differentially expressed between the two strains of mice which we will refer to as strain 0 and 1. We can apply tests to the technical replicates of pooled samples or the data from 12 individual mice. We can identify these pooled samples because all mice from each strain were represented in these samples and thus the sum of the rows of experimental design matrix add up to 12:

We can determine the strain from the column names:

If we compare the mean expression between groups for each gene we find several showing consistent differences. Here are two examples: 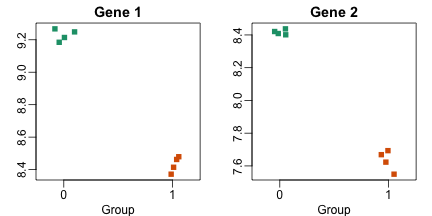 But would these results hold up if we selected another 24 mice? Note that the equation for the t-test we presented in the previous section include the population standard deviations. Are these quantities measured here? Note that it is being replicated here is the experimental protocol. We have created four technical replicates for each pooled sample. Gene 1 may be a highly variable gene within strain of mice while Gene 2 a stable one, but we have no way of seeing this.

We also have microarray data for each individual mice. For each strain we have 12 biological replicates. We can find them by looking for rows with just one 1.

It turns out that some technical replicates were included for some individual mice so we remove them to illustrate an analysis with only biological replicates:

We can compute the sample variance for each gene and compare to the standard deviation obtained with the technical replicates. 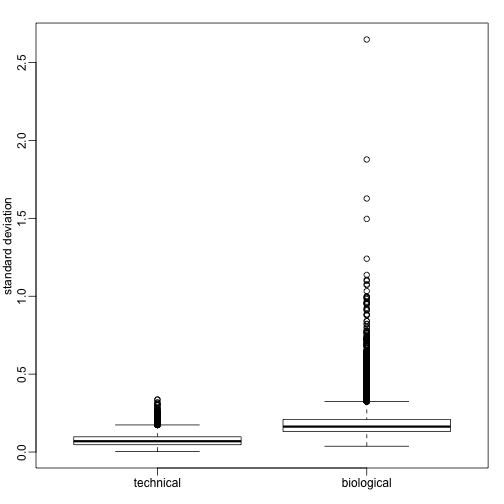 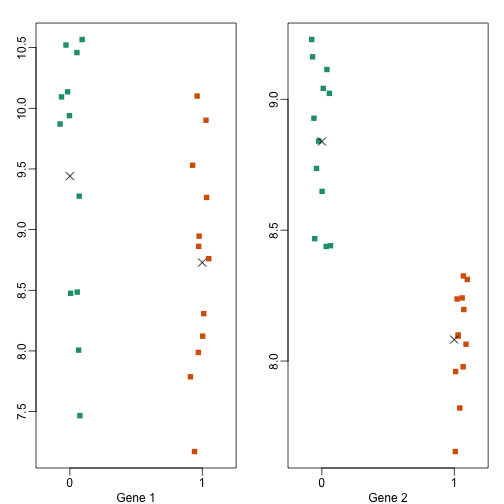 Which of these two genes do we feel more confident reporting as being differentially expressed? If another investigator takes another random sample of mice and tries the same experiment, which one do you think will replicate? Measuring biological variability is essential if we want our conclusions to be about the strain of mice in general as opposed to the specific mice we have.

An analysis with biological replicates have as a population these two strains of mice. An analysis with technical replicates have as a population the twelve mice we selected and the variability is related to the measurement technology. In science we typically are concerned with populations. As a very practical example, not that if another lab performs this experiment they will have another set of twelve mice and thus inference about populations are more likely to replicate.