Below we will discuss the Central Limit Theorem (CLT) and the t-distribution, both of which help us make important calculations related to probabilities. Both are frequently used in science to test statistical hypotheses. To use these, we have to make different assumptions from those for the CLT and the t-distribution. However, if the assumptions are true, then we are able to calculate the exact probabilities of events through the use of mathematical formula.

This implies that if we take many samples of size , then the quantity:

is approximated with a normal distribution centered at 0 and with standard deviation 1.

Now we are interested in the difference between two sample averages. Here again a mathematical result helps. If we have two random variables and with means and and variance and respectively, then we have the following result: the mean of the sum is the sum of the means . Using one of the facts we mentioned earlier, this implies that the mean of with , which implies that the mean of is . This is intuitive. However, the next result is perhaps not as intuitive. If and are independent of each other, as they are in our mouse example, then the variance (SD squared) of is the sum of the variances . This implies that variance of the difference is the variance of with which is . So the variance of the difference is also the sum of the variances. If this seems like a counterintuitive result, remember that if and are independent of each other, the sign does not really matter. It can be considered random: if is normal with certain variance, for example, so is . Finally, another useful result is that the sum of normal variables is again normal.

This suggests that this ratio:

is approximated by a normal distribution centered at 0 and standard deviation 1. Using this approximation makes computing p-values simple because we know the proportion of the distribution under any value. For example, only 5% of these values are larger than 2 (in absolute value):

Note that we are dividing by and , instead of by and . There is a theoretical reason for doing this which we do not explain here. But to get an intuition, think of the case when you just have 2 numbers. The average distance to the mean is basically 1/2 the difference between the two numbers. So you really just have information from one number. This is somewhat of a minor point. The main point is that and serve as estimates of and

So we can redefine our ratio as

if or in general,

The CLT tells us that when and are large, this random variable is normally distributed with mean 0 and SD 1. Thus we can compute p-values using the function pnorm.

This is the ratio of two random variables so it is not necessarily normal. The fact that the denominator can be small by chance increases the probability of observing large values. William Sealy Gosset, an employee of the Guinness brewing company, deciphered the distribution of this random variable and published a paper under the pseudonym “Student”. The distribution is therefore called Student’s t-distribution. Later we will learn more about how this result is used.

Here we will use the mice phenotype data as an example. We start by creating two vectors, one for the control population and one for the high-fat diet population:

It is important to keep in mind that what we are assuming to be normal here is the distribution of , not the random variable . Although we can’t do this in practice, in this illustrative example, we get to see this distribution for both controls and high fat diet mice: 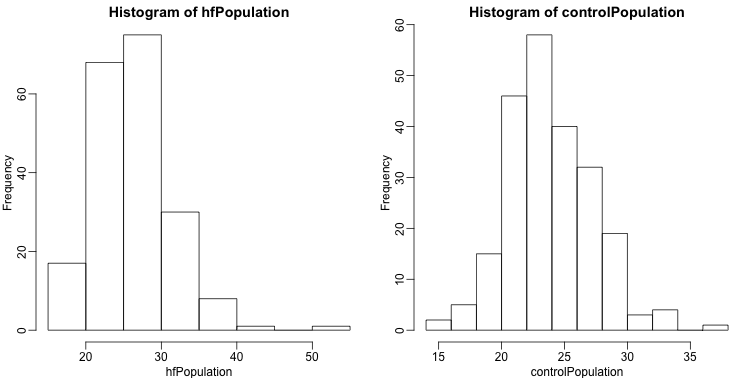 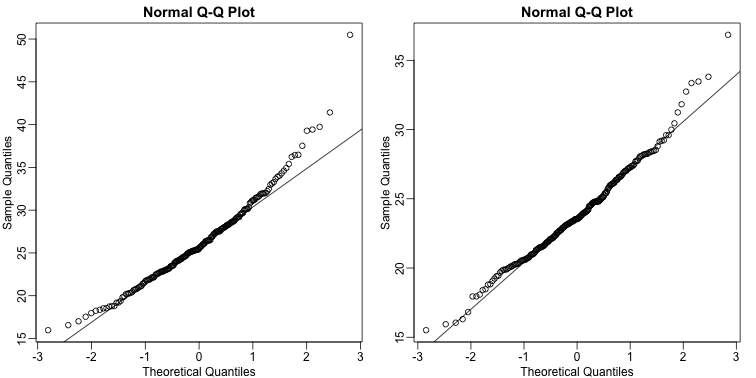 The larger the sample, the more forgiving the result is to the weakness of this approximation. In the next section, we will see that for this particular dataset the t-distribution works well even for sample sizes as small as 3.