“The greatest value of a picture is when it forces us to notice what we never expected to see.” -John W. Tukey

Biases, systematic errors and unexpected variability are common in data from the life sciences. Failure to discover these problems often leads to flawed analyses and false discoveries. As an example, consider that experiments sometimes fail and not all data processing pipelines, such as the t.test function in R, are designed to detect these. Yet, these pipelines still give you an answer. Furthermore, it may be hard or impossible to notice an error was made just from the reported results.

Graphing data is a powerful approach to detecting these problems. We refer to this as exploratory data analysis (EDA). Many important methodological contributions to existing techniques in data analysis were initiated by discoveries made via EDA. In addition, EDA can lead to interesting biological discoveries which would otherwise be missed through simply subjecting the data to a battery of hypothesis tests. Through this book, we make use of exploratory plots to motivate the analyses we choose. Here we present a general introduction to EDA using height data.

We have already introduced some EDA approaches for univariate data, namely the histograms and qq-plot. Here we describe the qq-plot in more detail and some EDA and summary statistics for paired data. We also give a demonstration of commonly used figures that we recommend against.

To corroborate that a theoretical distribution, for example the normal distribution, is in fact a good approximation, we can use quantile-quantile plots (qq-plots). Quantiles are best understood by considering the special case of percentiles. The p-th percentile of a list of a distribution is defined as the number q that is bigger than p% of numbers (so the inverse of the cumulative distribution function we defined earlier). For example, the median 50-th percentile is the median. We can compute the percentiles for our list of heights:

and for the normal distribution: 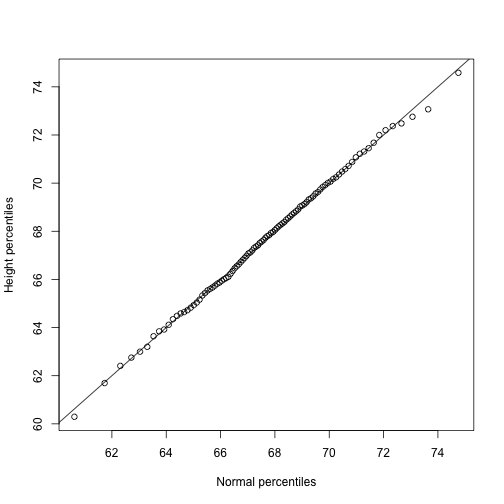 Note how close these values are. Also, note that we can see these qq-plots with less code (this plot has more points than the one we constructed manually, and so tail-behavior can be seen more clearly). 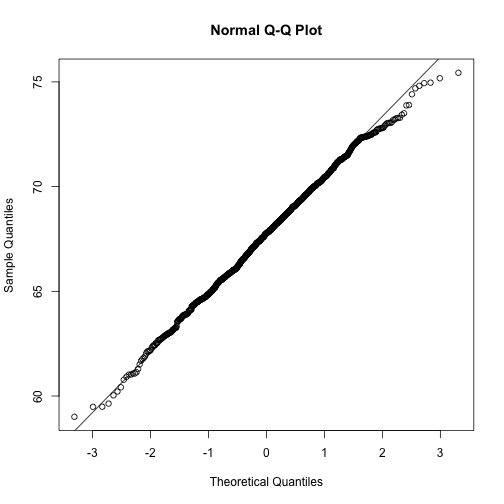 However, the qqnorm function plots against a standard normal distribution. This is why the line has slope popsd(x) and intercept mean(x).

In the example above, the points match the line very well. In fact, we can run Monte Carlo simulations to see plots like this for data known to be normally distributed. 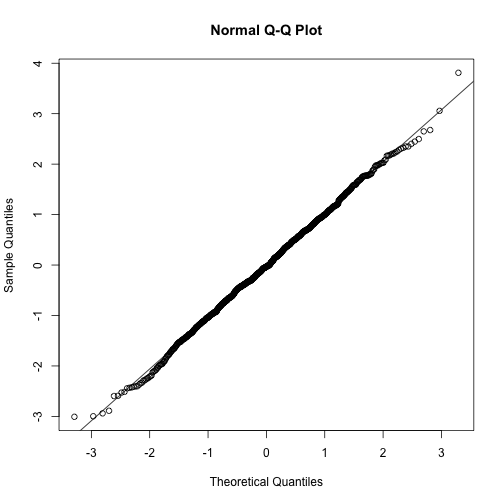 We can also get a sense for how non-normally distributed data will look in a qq-plot. Here we generate data from the t-distribution with different degrees of freedom. Notice that the smaller the degrees of freedom, the fatter the tails. We call these “fat tails” because if we plotted an empirical density or histogram, the density at the extremes would be higher than the theoretical curve. In the qq-plot, this can be seen in that the curve is lower than the identity line on the left side and higher on the right side. This means that there are more extreme values than predicted by the theoretical density plotted on the x-axis. 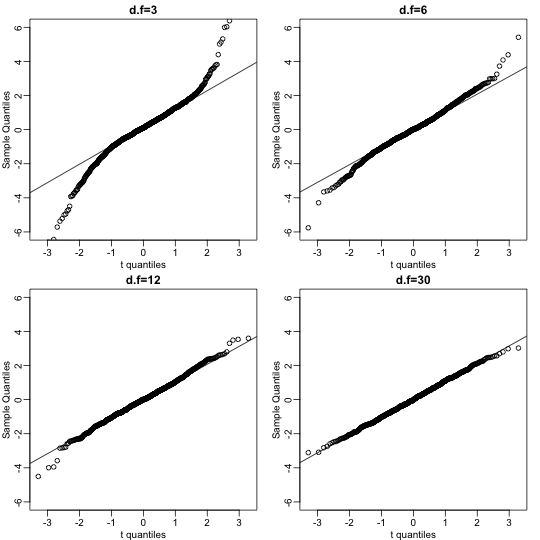 Data is not always normally distributed. Income is a widely cited example. In these cases, the average and standard deviation are not necessarily informative since one can’t infer the distribution from just these two numbers. The properties described above are specific to the normal. For example, the normal distribution does not seem to be a good approximation for the direct compensation for 199 United States CEOs in the year 2000. 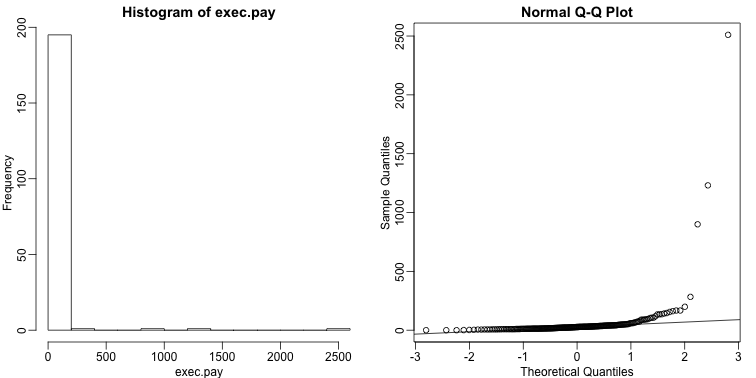 In addition to qq-plots, a practical summary of data is to compute 3 percentiles: 25-th, 50-th (the median) and the 75-th. A boxplot shows these 3 values along with a range of the points within median 1.5 (75-th percentile - 25th-percentile). Values outside this range are shown as points and sometimes refereed to as outliers. 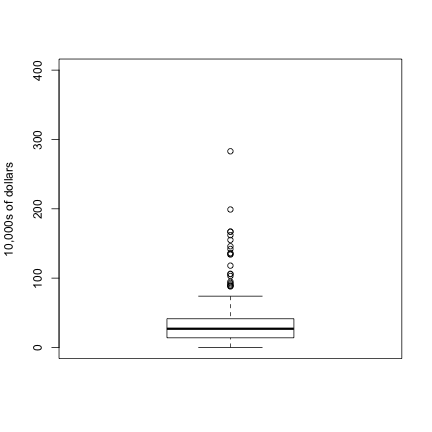 Here we show just one boxplot. However, one of the great benefits of boxplots is that we could easily show many distributions in one plot, by lining them up, side by side. We will see several examples of this throughout the book.

The methods described above relate to univariate variables. In the biomedical sciences, it is common to be interested in the relationship between two or more variables. A classic example is the father/son height data used by Francis Galton to understand heredity. If we were to summarize these data, we could use the two averages and two standard deviations since both distributions are well approximated by the normal distribution. This summary, however, fails to describe an important characteristic of the data. 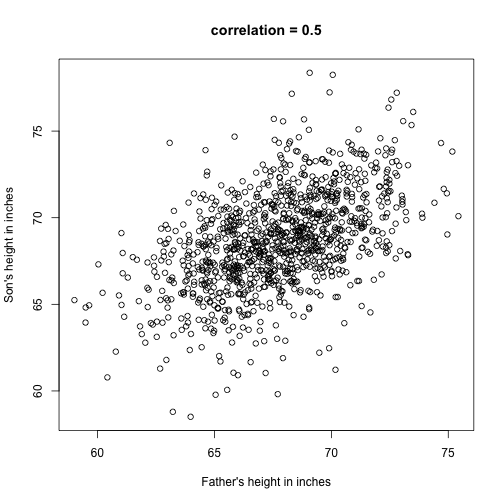 The scatter plot shows a general trend: the taller the father, the taller the son. A summary of this trend is the correlation coefficient, which in this cases is 0.5. We will motivate this statistic by trying to predict the son’s height using the father’s height.

Suppose we are asked to guess the height of randomly select sons. The average height, 68.7 inches, is the value with the highest proportion (see histogram) and would be our prediction. But what if we are told that the father is 72 inches tall, do we sill guess 68.7?

The father is taller than average. Specifically, he is 1.75 standard deviations taller than the average father. So should we predict that the son is also 1.75 standard deviations taller? It turns out that this would be an overestimate. To see this, we look at all the sons with fathers who are about 72 inches. We do this by stratifying the father heights. 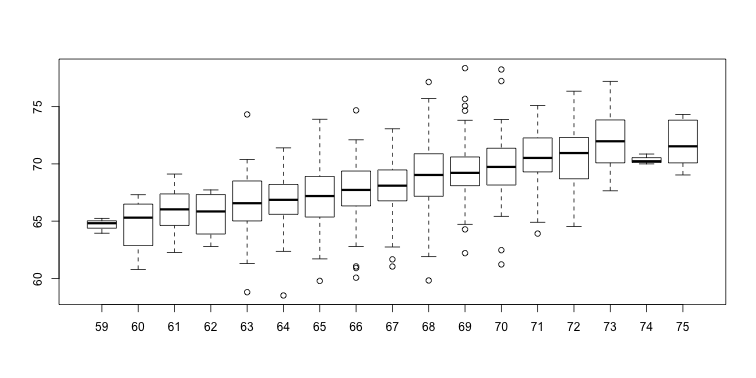 Stratification followed by boxplots lets us see the distribution of each group. The average height of sons with fathers that are 72 inches tall is 70.7 inches. We also see that the medians of the strata appear to follow a straight line (remember the middle line in the boxplot shows the median, not the mean). This line is similar to the regression line, with a slope that is related to the correlation, as we will learn below.

A pair of random variables is considered to be approximated by bivariate normal when the proportion of values below, for example and , is approximated by this expression:

This may seem like a rather complicated equation, but the concept behind it is rather intuitive. An alternative definition is the following: fix a value and look at all the pairs for which . Generally, in statistics we call this exercise conditioning. We are conditioning on . If a pair of random variables is approximated by a bivariate normal distribution, then the distribution of conditioned on is approximated with a normal distribution, no matter what we choose. Let’s see if this holds with our height data. We show 4 different strata: 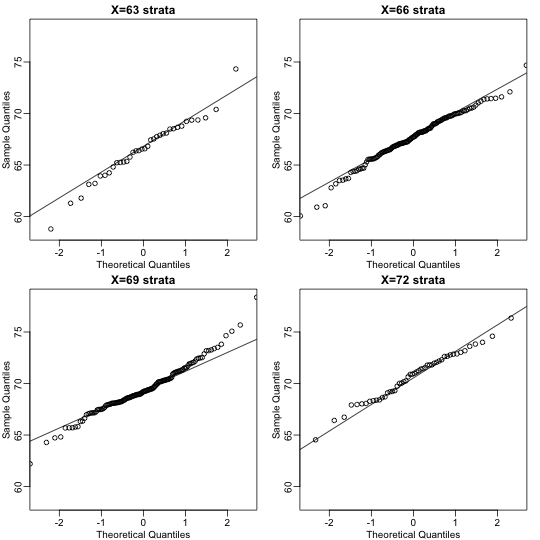 Now we come back to defining correlation. Mathematical statistics tells us that when two variables follow a bivariate normal distribution, then for any given value of , the average of the in pairs for which is:

Another way to see this is to form a prediction : for every SD away from the mean in , we predict SDs away for :

If there is perfect correlation, we predict the same number of SDs. If there is 0 correlation, then we don’t use at all. For values between 0 and 1, the prediction is somewhere in between. For negative values, we simply predict in the opposite direction.

To confirm that the above approximations hold in this case, let’s compare the mean of each strata to the identity line and the regression line: 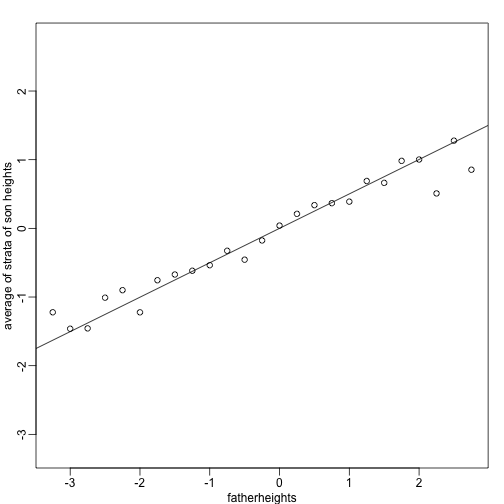 The standard deviation of the conditional distribution described above is:

This is where statements like explains % of the variation in : the variance of is and, once we condition, it goes down to . It is important to remember that the “variance explained” statement only makes sense when the data is approximated by a bivariate normal distribution.