We will describe three examples from the life sciences: one from physics, one related to genetics, and one from a mouse experiment. They are very different, yet we end up using the same statistical technique: fitting linear models. Linear models are typically taught and described in the language of matrix algebra.

Imagine you are Galileo in the 16th century trying to describe the velocity of a falling object. An assistant climbs the Tower of Pisa and drops a ball, while several other assistants record the position at different times. Let’s simulate some data using the equations we know today and adding some measurement error:

The assistants hand the data to Galileo and this is what he sees: 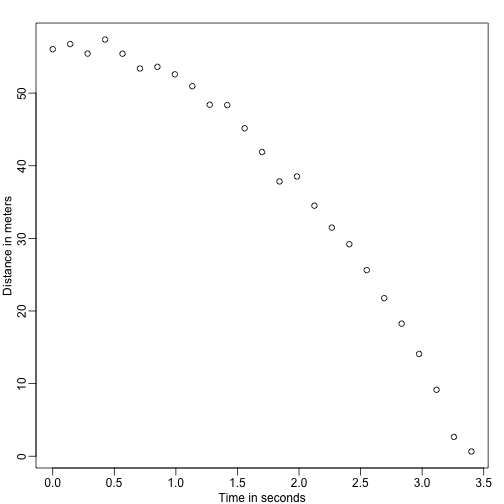 He does not know the exact equation, but by looking at the plot above he deduces that the position should follow a parabola. So he models the data with:

With representing location, representing the time, and accounting for measurement error. This is a linear model because it is a linear combination of known quantities (th s) referred to as predictors or covariates and unknown parameters (the s).

Now imagine you are Francis Galton in the 19th century and you collect paired height data from fathers and sons. You suspect that height is inherited. Your data: 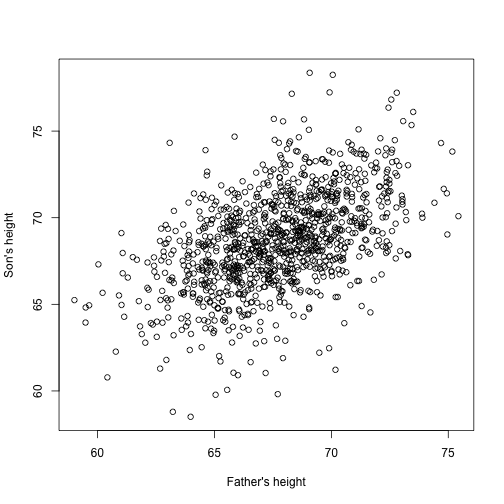 The sons’ heights do seem to increase linearly with the fathers’ heights. In this case, a model that describes the data is as follows:

This is also a linear model with and , the father and son heights respectively, for the -th pair and a term to account for the extra variability. Here we think of the fathers’ heights as the predictor and being fixed (not random) so we use lower case. Measurement error alone can’t explain all the variability seen in . This makes sense as there are other variables not in the model, for example, mothers’ heights, genetic randomness, and environmental factors.

Here we read-in mouse body weight data from mice that were fed two different diets: high fat and control (chow). We have a random sample of 12 mice for each. We are interested in determining if the diet has an effect on weight. Here is the data: 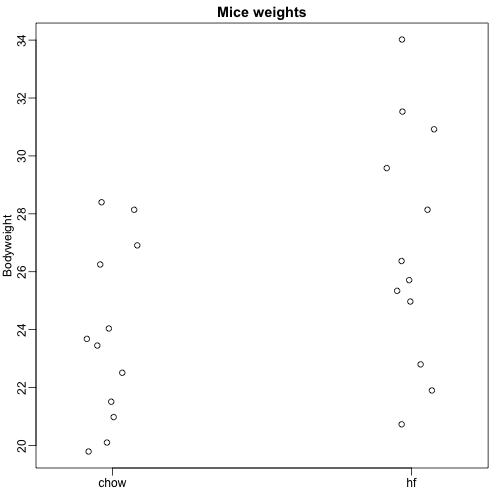 We want to estimate the difference in average weight between populations. We demonstrated how to do this using t-tests and confidence intervals, based on the difference in sample averages. We can obtain the same exact results using a linear model:

We have seen three very different examples in which linear models can be used. A general model that encompasses all of the above examples is the following:

Note that we have a general number of predictors . Matrix algebra provides a compact language and mathematical framework to compute and make derivations with any linear model that fit into the above framework.

The standard approach in science is to find the values that minimize the distance of the fitted model to the data. The following is called the least squares (LS) equation and we will see it often in this chapter:

Once we find the minimum, we will call the values the least squares estimates (LSE) and denote them with . The quantity obtained when evaluating the least square equation at the estimates is called the residual sum of squares (RSS). Since all these quantities depend on , they are random variables. The s are random variables and we will eventually perform inference on them.

Thanks to my high school physics teacher, I know that the equation for the trajectory of a falling object is:

with and the starting height and velocity respectively. The data we simulated above followed this equation and added measurement error to simulate n observations for dropping the ball from the tower of Pisa . This is why we used this code to simulate data:

Here is what the data looks like with the solid line representing the true trajectory: 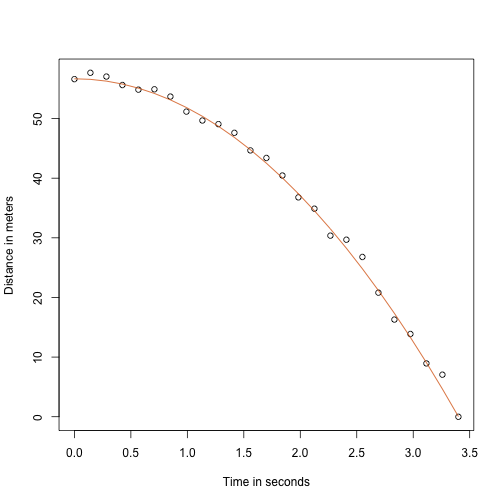 But we were pretending to be Galileo and so we don’t know the parameters in the model. The data does suggest it is a parabola, so we model it as such:

How do we find the LSE?

In R we can fit this model by simply using the lm function. We will describe this function in detail later, but here is a preview:

It gives us the LSE, as well as standard errors and p-values.

Part of what we do in this section is to explain the mathematics behind this function.

Let’s write a function that computes the RSS for any vector :

So for any three dimensional vector we get an RSS. Here is a plot of the RSS as a function of when we keep the other two fixed: 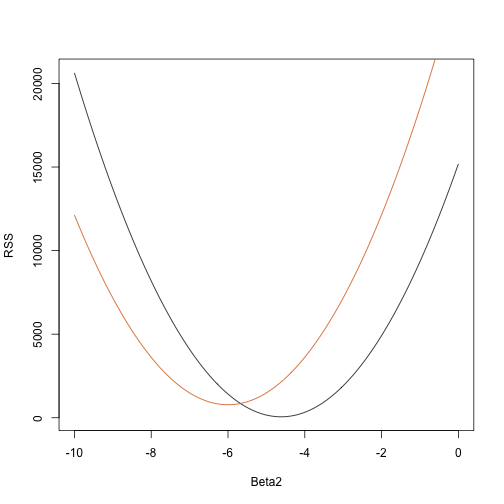 Trial and error here is not going to work. Instead, we can use calculus: take the partial derivatives, set them to 0 and solve. Of course, if we have many parameters, these equations can get rather complex. Linear algebra provides a compact and general way of solving this problem.

When studying the father-son data, Galton made a fascinating discovery using exploratory analysis. He noted that if he tabulated the number of father-son height pairs and followed all the x,y values having the same totals in the table, they formed an ellipsis. In the plot above, made by Galton, you see the ellipsis formed by the pairs having 3 cases. This then led to modeling this data as correlated bivariate normal which we described earlier:

We described how we can use math to show that if you keep fixed (condition to be ) the distribution of is normally distributed with mean: and standard deviation . Note that is the correlation between and , which implies that if we fix , does in fact follow a linear model. The and parameters in our simple linear model can be expressed in terms of , and .