“All models are wrong, but some are useful” -George E. P. Box

The CLT is backed by theoretical results that guarantee that the approximation is accurate. However, we cannot always use this approximation, such as when our sample size is too small. Previously, we described how the sample average can be approximated as t-distributed when the population data is approximately normal. However, there is no theoretical backing for this assumption. We are now modeling. In the case of height, we know from experience that this turns out to be a very good model.

The first distribution we will describe is the binomial distribution. It reports the probability of observing successes in trails as

with the probability of success. The best known example is coin tosses with the number of heads when tossing coins. In this example .

Note that is the average of independent random variables and thus the CLT tells us that is approximately normal when is large. This distribution has many applications in the life sciences. Recently, it has been used by the variant callers and genotypers applied to next generation sequencing. A special case of this distribution is approximated by the Poisson distribution which we describe next. 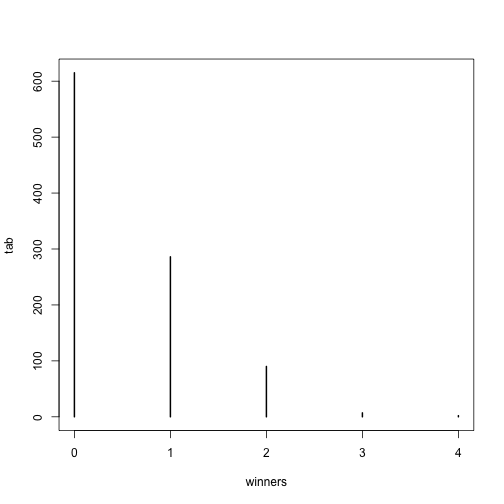 For cases like this, where is very large, but is small enough to make (call it ) a number between 0 and, for example, 10, then can be shown to follow a Poisson distribution, which has a simple parametric form:

So how does this help us? One way is that it provides insight about the statistical properties of summaries that are widely used in practice. For example, let’s say we only have one sample from each of a case and control RNAseq experiment and we want to report the genes with larges fold-changes. One insight that the Poisson model provides is that under the null that there are no differences, the statistical variability of this quantity depends on the total abundance of the gene. We can show this mathematically, but here is a quick simulation to demonstrate the point: 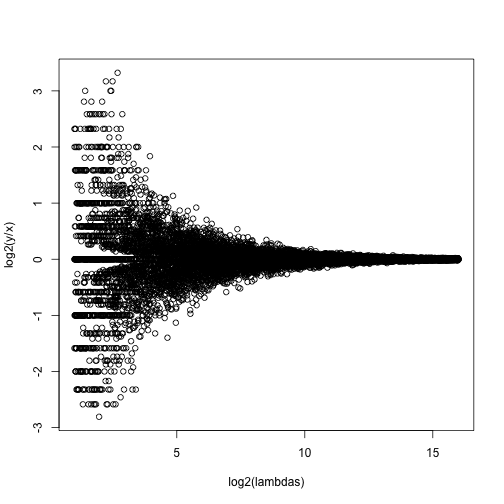 For lower values of lambda there is much more variability and, if we were to report anything with a fold change of 2 or more, the number of false positives would be quite high for low abundance genes.

NGS experiments and the Poisson distribution

In this section we will use the data stored in this dataset:

The data is contained in a SummarizedExperiment object, which we do not describe here. The important thing to know is that it includes a matrix of data, where each row is a genomic feature and each column is a sample. We can extract this data using the assay function. For this dataset, the value of a single cell in the data matrix is the count of reads which align to a given gene for a given sample. Thus, a similar plot to the one we simulated above with technical replicates reveals that the behavior predicted by the model is present in experimental data: 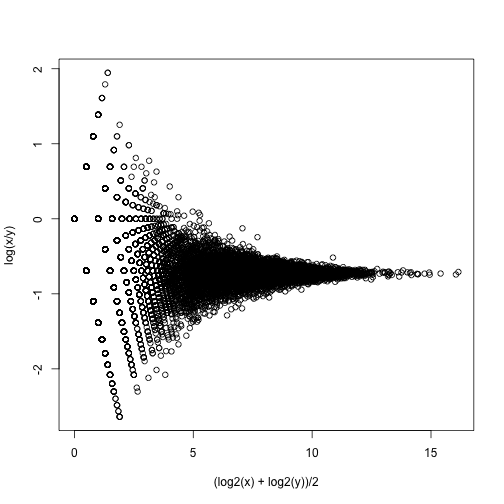 If we compute the standard deviations across four individuals, it is quite a bit higher than what is predicted by a Poisson model. Assuming most genes are differentially expressed across individuals, then, if the Poisson model is appropriate, there should be a linear relationship in this plot: 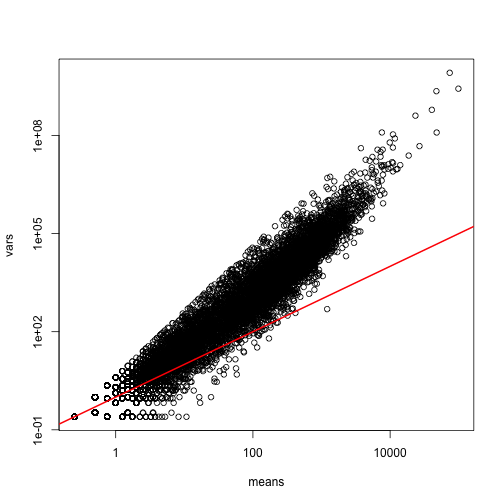 To illustrate the concept of maximum likelihood estimates (MLE), we use a relatively simple dataset containing palindrome locations in the HMCV genome. We read in the locations of the palindrome and then count the number of palindromes in each 4,000 basepair segments. 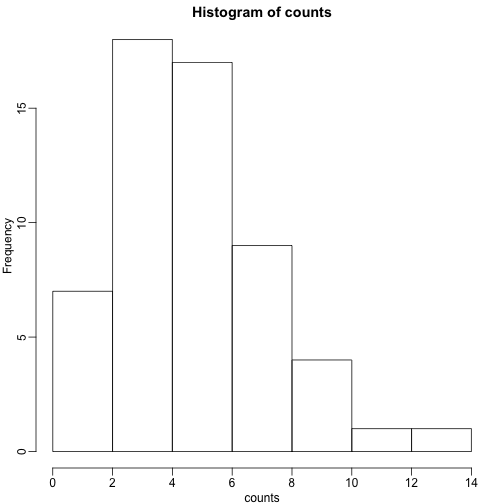 The MLE is the value of that maximizes the likelihood:.

In practice, it is more convenient to maximize the log-likelihood which is the summation that is exponentiated in the expression above. Below we write code that computes the log-likelihood for any and use the function optimize to find the value that maximizes this function (the MLE). We show a plot of the log-likelihood along with vertical line showing the MLE. 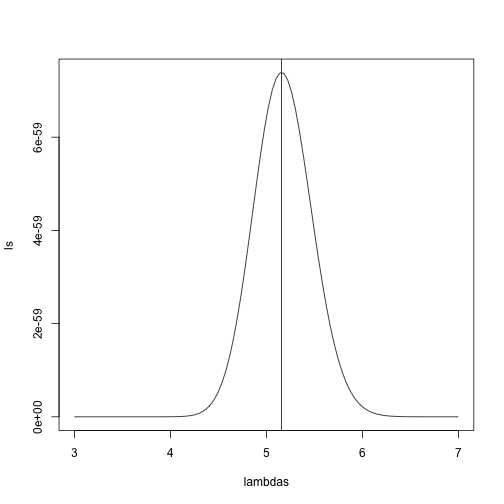 If you work out the math and do a bit of calculus, you realize that this is a particularly simple example for which the MLE is the average.

Note that a plot of observed counts versus counts predicted by the Poisson shows that the fit is quite good in this case: 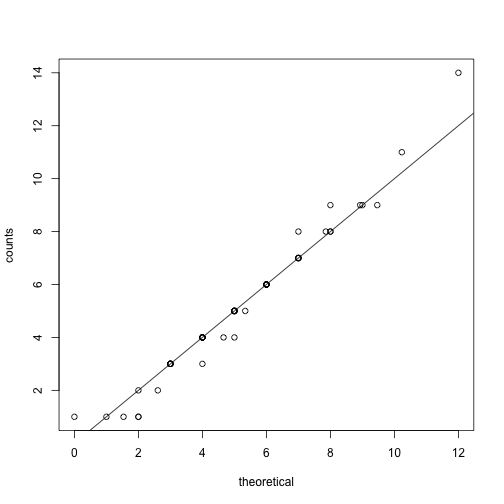 We therefore can model the palindrome count data with a Poisson with .

Different genes vary differently across biological replicates. Later, in the hierarchical models chapter, we will describe one of the most influential statistical methods in the analysis of genomics data. This method provides great improvements over naive approaches to detecting differentially expressed genes. This is achieved by modeling the distribution of the gene variances. Here we describe the parametric model used in this method.

We want to model the distribution of the gene-specific standard errors. Are they normal? Keep in mind that we are modeling the population standard errors so CLT does not apply, even though we have thousands of genes.

We can now explore the sample standard deviation: 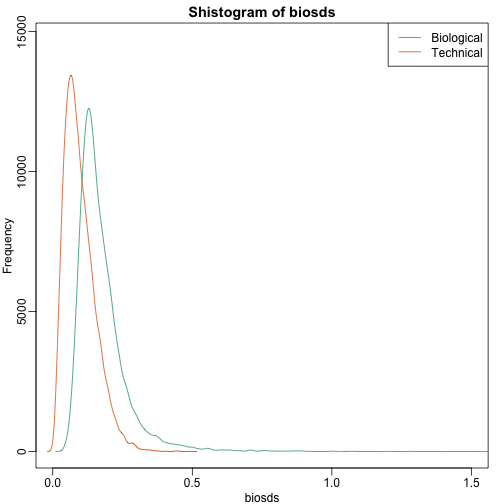 If we want to model this variability, we first notice that the normal distribution is not appropriate here since the right tail is rather large. Also, because SDs are strictly positive, there is a limitation to how symmetric this distribution can be. A qqplot shows this very clearly: 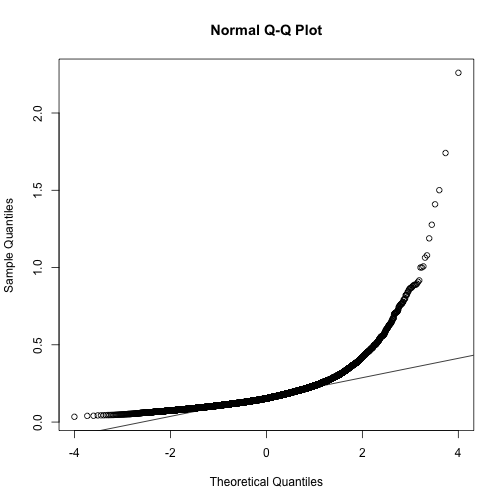 There are parametric distributions that posses these properties (strictly positive and heavy right tails). Two examples are the gamma and F distributions. The density of the gamma distribution is defined by:

It is defined by two parameters and that can, indirectly, control location and scale. They also control the shape of the distribution. For more on this distribution please refer to this book.

The F-distribution comes up in analysis of variance (ANOVA). It is also always positive and has large right tails. Two parameters control its shape:

with the beta function and and are called the degrees of freedom for reasons having to do with how it arises in ANOVA. A third parameter is sometimes used with the F-distribution, which is a scale parameter.

In a later section we will learn about a hierarchical model approach to improve estimates of variance. In these cases it is mathematically convenient to model the distribution of the variance . The hierarchical model used here implies that the sample standard deviation of genes follows scaled F-statistics: 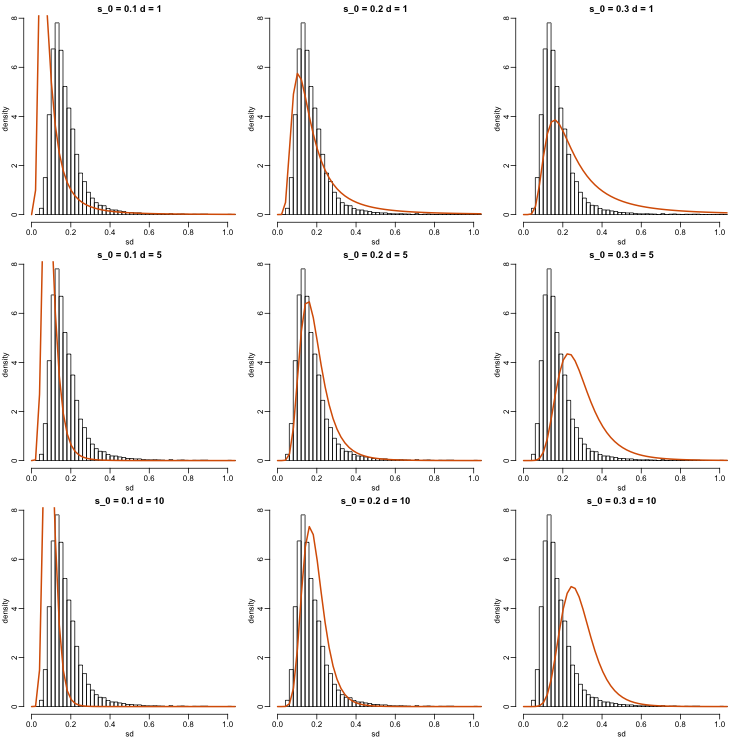 Now which and fit our data best? This is a rather advanced topic as the MLE does not perform well for this particular distribution (we refer to Smyth (2004)). The Bioconductor limma package provides a function to estimate these parameters:

The fitted models do appear to provide a reasonable approximation, as demonstrated by the qq-plot and histogram: 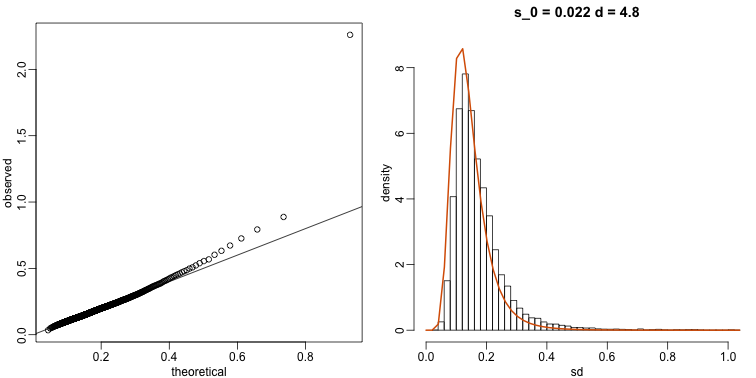