We will now demonstrate how to obtain a p-value in practice. We begin by loading experimental data and walking you through the steps used to form a t-statistic and compute a p-value. We can perform this task with just a few lines of code (go to the end of section to see them). However, to understand the concepts, we will construct a t-statistic from “scratch”.

Read in and prepare data

We start by reading in the data. A first important step is to identify which rows are associated with treatment and control, and to compute the difference in mean.

This is the SE of the sample average, but we actually want the SE of diff. We saw how statistical theory tells us that the variance of the difference of two random variables is the sum of its variances, so we compute the variance and take the square root:

As explained in the previous section, the CLT tells us that for large sample sizes, both sample averages mean(treatment) and mean(control) are normal. Statistical theory tells us that the difference of two normally distributed random variables is again normal, so CLT tells us that tstat is approximately normal with mean 0 (the null hypothesis) and SD 1 (we divided by its SE).

So now to calculate a p-value all we need to do is ask: how often does a normally distributed random variable exceed diff? R has a built-in function, pnorm, to answer this specific question. pnorm(a) returns the probability that a random variable following the standard normal distribution falls below a. To obtain the probability that it is larger than a, we simply use 1-pnorm(a). We want to know the probability of seeing something as extreme as diff: either smaller (more negative) than -abs(diff) or larger than abs(diff). We call these two regions “tails” and calculate their size:

In this case, the p-value is smaller than 0.05 and using the conventional cutoff of 0.05, we would call the difference statistically significant.

Now there is a problem. CLT works for large samples, but is 12 large enough? A rule of thumb for CLT is that 30 is a large enough sample size (but this is just a rule of thumb). The p-value we computed is only a valid approximation if the assumptions hold, which do not seem to be the case here. However, there is another option other than using CLT.

The t-distribution in Practice 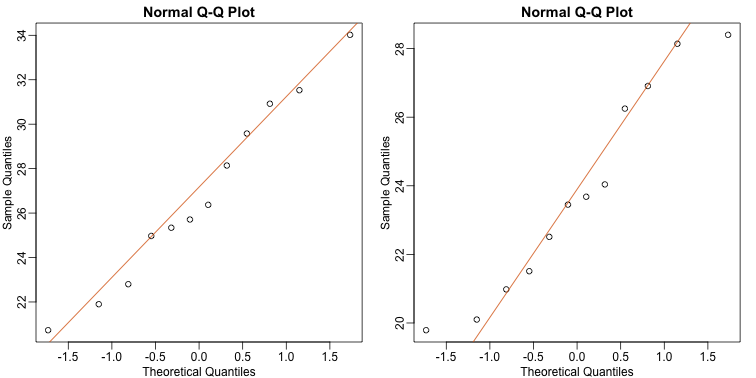 If we use this approximation, then statistical theory tells us that the distribution of the random variable tstat follows a t-distribution. This is a much more complicated distribution than the normal. The t-distribution has a location parameter like the normal and another parameter called degrees of freedom. R has a nice function that actually computes everything for us.

To see just the p-value, we can use the $ extractor:

It may be confusing that one approximation gave us one p-value and another gave us another, because we expect there to be just one answer. However, this is not uncommon in data analysis. We used different assumptions, different approximations, and therefore we obtained different results.

Later, in the power calculation section, we will describe type I and type II errors. As a preview, we will point out that the test based on the CLT approximation is more likely to incorrectly reject the null hypothesis (a false positive), while the t-distribution is more likely to incorrectly accept the null hypothesis (false negative).

Running the t-test in practice

Now that we have gone over the concepts, we can show the relatively simple code that one would use to actually compute a t-test:

The arguments to t.test can be of type data.frame and thus we do not need to unlist them into numeric objects.